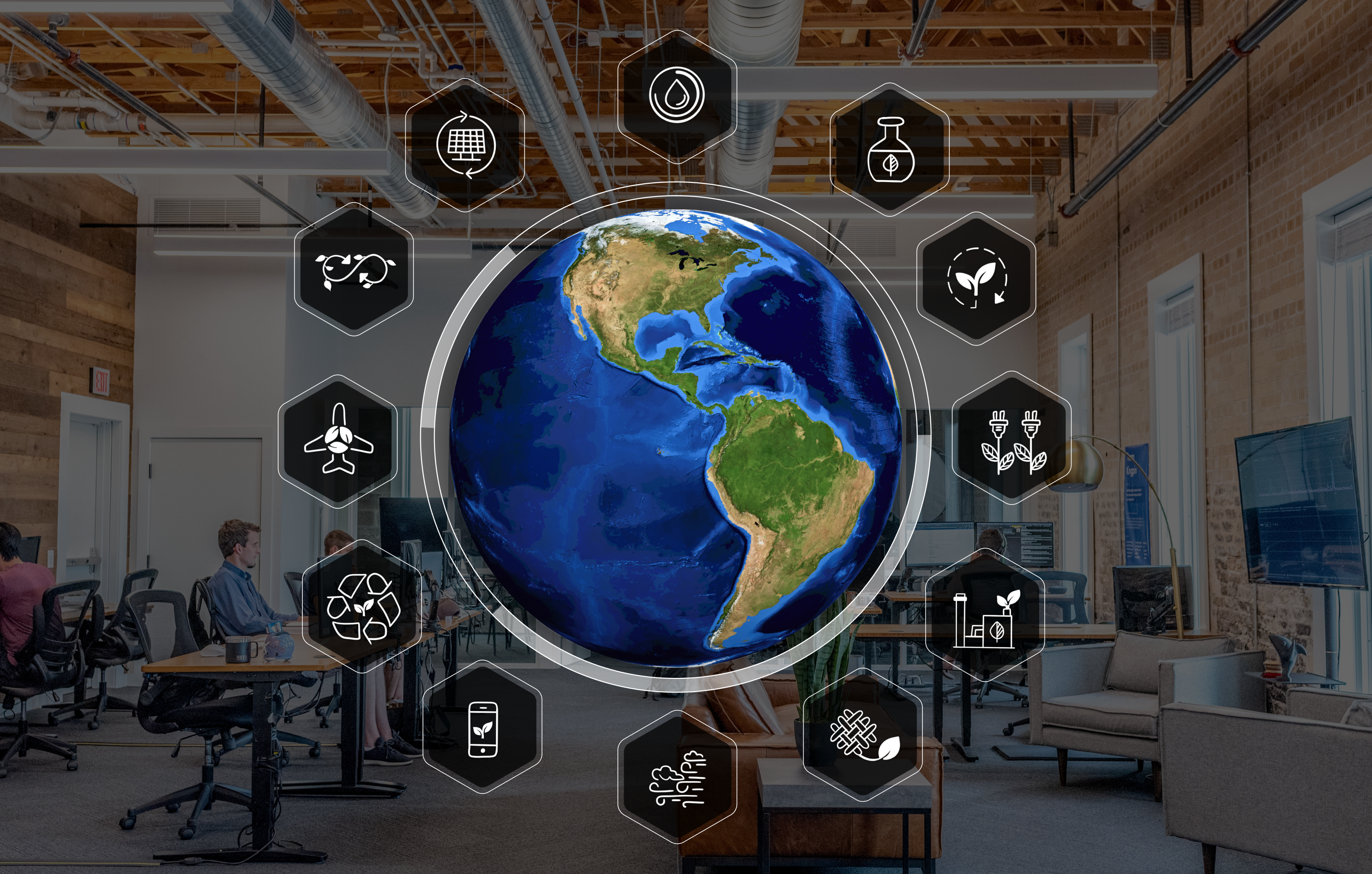 Ecology and environmental protection are among the most debated topics around global warming. In today's economy, it is difficult to imagine a manufacturing company that has not been touched by the concept of sustainability. However, not long ago, investing in technology to implement these trends on an industrial scale was considered more of a philanthropy than a way to increase profits. Has it always been so, has the situation changed and are we advancing in the climate challenge? The answer to these questions lies in examining the overall innovation system, the results of which depend directly on the goals of product formation and the willingness of investors to support them.

Responding to climate change involves an intensive movement towards reducing emissions and fossil fuel-based energy. The solution to this transition is a massive, long-term effort, in fact, a technological revolution. One of the issues hindering this development may be past investor distrust of climate technology companies. From 2006 to 2011, according to the report by MIT Energy Initiative, more than half of 25 billion dollars infused were lost, and 90% of companies have not returned the initial capital investments[1]. Nevertheless, the first boom has passed, and now such tech startups are back in the game. As stated by the DealRoom study published last October, young companies have attracted an investment record of $32 billion in 2021, a 4.9-fold increase since the Paris climate agreement five years ago[2]. An even broader picture can be seen in the PwC State of Climate Tech 2021 report, which shows that investments in companies developing technology to combat the climate crisis increased to $87.5 billion in the first six months (up 210% from $24.8 billion in the same period a year earlier) [3].

Reasons why the return and use of funds are different this time.

Primarily, the cost of renewable energy has become cheaper and can now compete with fossil fuels [4]. In this way, digital climate solutions such as solar panels, wind turbines, energy storage systems and electric vehicles are opening up new ways of shaping organization's' business models. Another important factor has been the emergence of so-called green finance - bonds and loans linked to sustainable development indicators. In addition to debt financing, equity investment is also reshaping: more and more funds are giving preference to issuers with ESG programs. For instance, Amazon's $2 billion Climate Pledge Fund supports start-ups creating technologies that will help the company achieve its goal of zero-carbon by 2040. Likewise, Bill Gates' investment fund, managed by Breakthrough Energy, will allocate $1.5 billion to joint projects with the US government to reduce carbon emissions. It should also be noted that policies and agreements regulating CO2 emissions are increasingly being negotiated among global nations and within countries. The 26th UN Climate Conference was held in Glasgow from 31 October to 12 November 2021, attended by 25,000 delegates from 200 countries. Key conclusions included taking responsibility for reducing energy consumption based on unrefined coal, phasing out inefficient fossil fuel subsidies, and ending deforestation. More recently, the US House of Representatives approved the Inflation Reduction Act, which also includes about $370 billion for climate programs [5]. They include the expansion of renewable energy sources, as well as the introduction of tax credits to encourage investment in nuclear power, clean-source hydrogen power, biofuels and carbon sequestration technologies in fossil-fuel-fired power plants. Thereby it is assumed that these actions will help the US reduce its carbon emissions by around 40% by 2030. However, assumptions are not the real world. Human behavior and energy consumption are hard to predict, and the current industrial infrastructure can't just disappear, look at the case of West Virginia. In this regard, young companies are becoming a driving force to develop the needful capacity (due to the network effect startup ecosystems have increased returns to scale, in particular, the economic impact of the startup ecosystem accelerates with the size of the ecosystem). It's no coincidence that BlackRock CEO Larry Fink noted that the next unicorn startups (short-term capitalization in excess of $1 billion) will be related to climate technology or as they're now called gigacorns - startups that offset a gigaton of carbon per year [6]. Their development can be reinforced as leading technology professionals, like Facebook CTO Mike Schroepfer, leave their jobs to work on projects aimed at tackling the climate crisis. 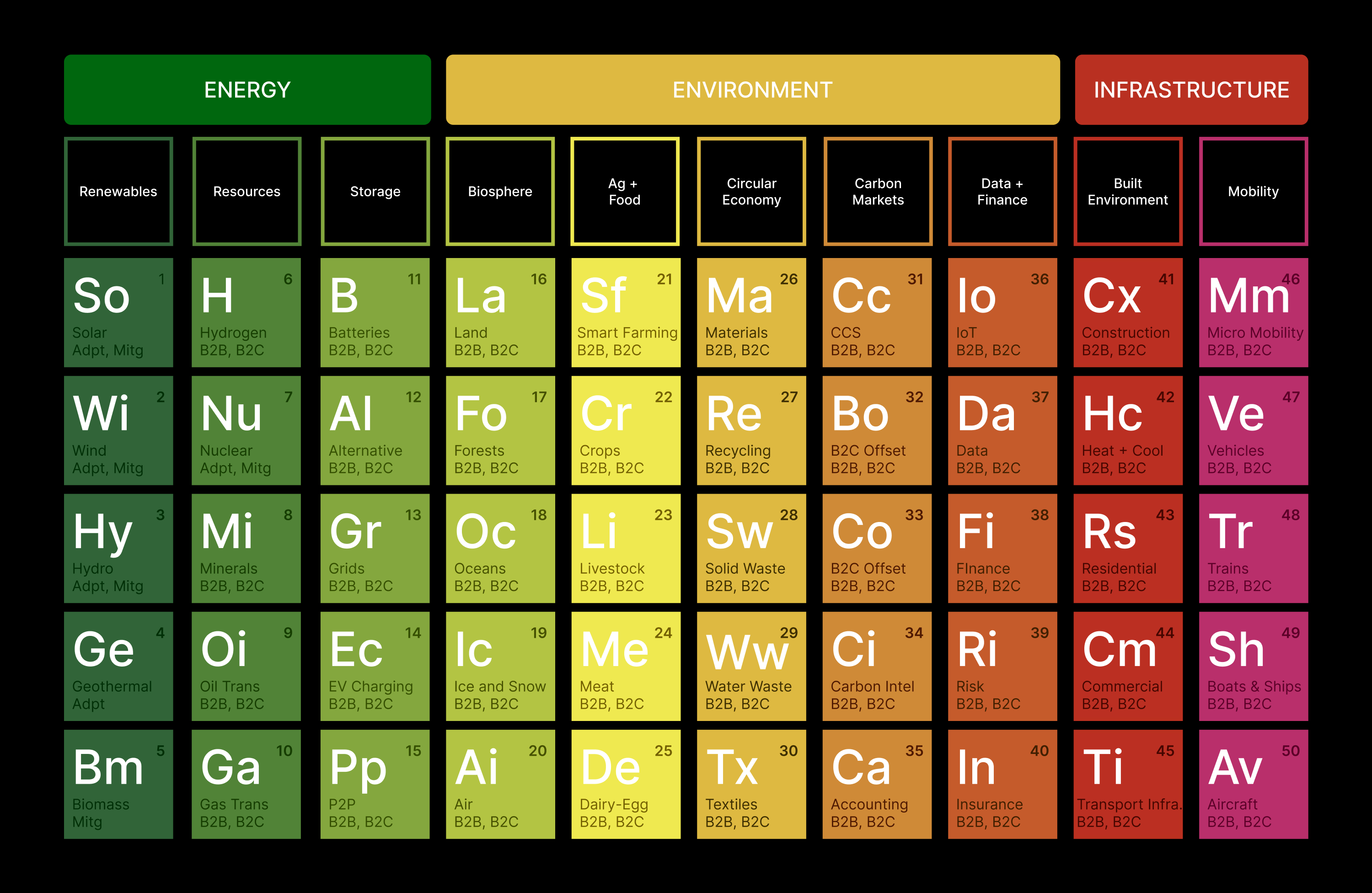 Climate initiatives are numerous and diverse. According to the report by the Global Entrepreneurship Network Startup Genome released on 24 January 2022, the top five cleantech ecosystems are located in Silicon Valley, Tel Aviv, Stockholm, London and Los Angeles [7]. Overall, North America and Europe dominate the clean tech sector. Of the top 25 ecosystems, they hold shares of 44% and 40% respectively. Based on this review, the main trends in clean technology are: new energy solutions, low-carbon building technology, alternative mobility (energy storage systems are particularly in demand), carbon capture and storage, waste management, and green materials. More detailed open source taxonomy can be seen in the Global Climate Landscape. With the help of machine learning, artificial intelligence supplemented by top-down analysis and human expertise, an interpretative understanding has been formed (context, history, purpose, business model, technology and interrelationships in the ecosystem are taken into account). Thus, in the last quarter of 2021, HolonIQ, together with regional partners around the world, identified the 1000 most promising climate start-ups in the world. As of the first half of 2022, the global network counts 47 unicorn climate technology companies since 2015 (including ranking by price valuation). Despite the record bar in total financing for 2021 being difficult to surpass, and the decline in the number of large deals (> $500M), investment activity continues to increase, particularly in the early stages (98 rounds > $100M in the first half of 2022, including 35 mega-rounds > $200M, compared to 61 rounds > $100M for all of 2021) [8,9]. 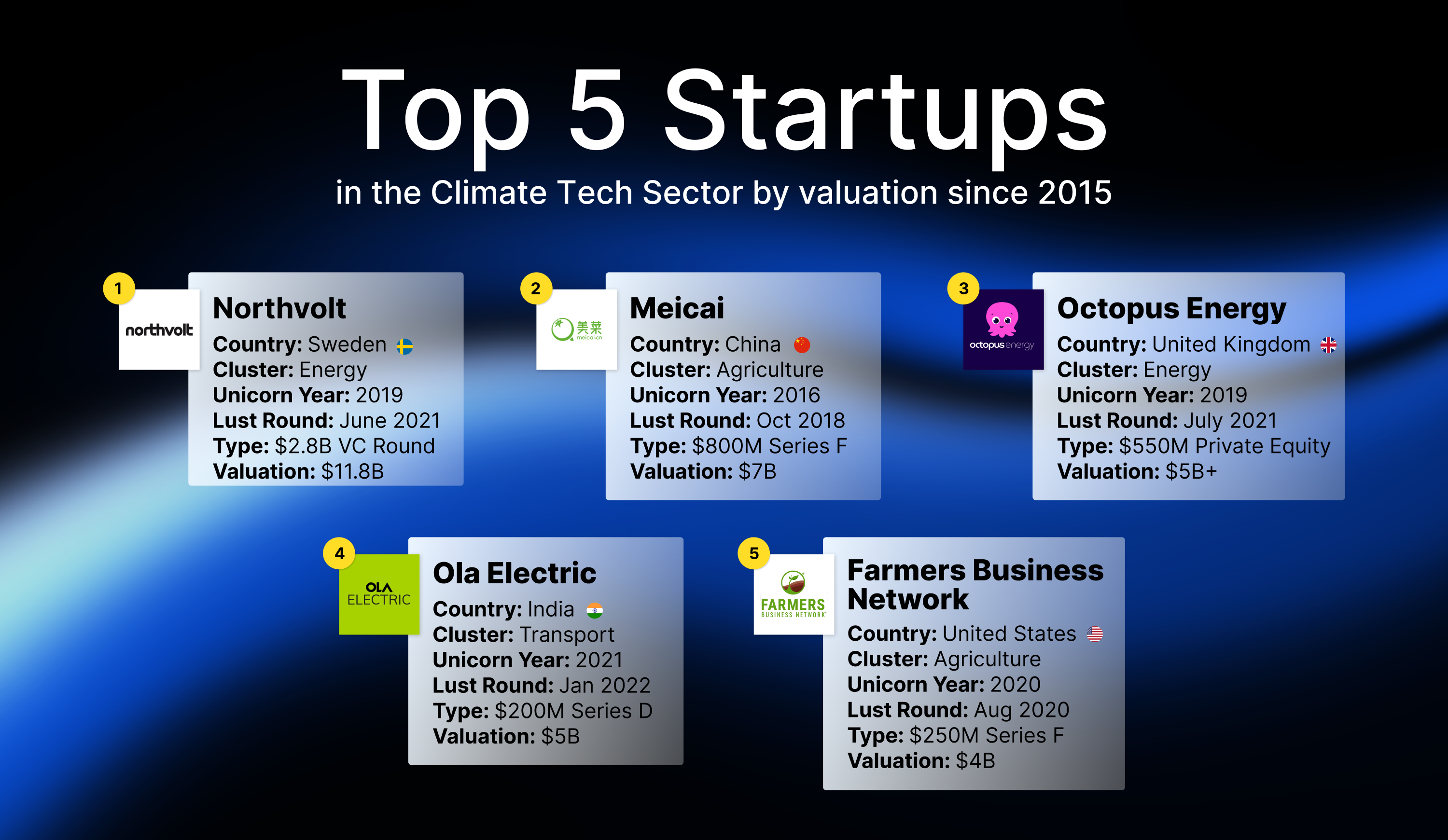 Moving on, SEO trend-finding platform Exploding Topics has highlighted 20 fastest-growing climate tech start-ups in 2022 , measured by growth in search queries over 5 years. Leadership was given to the Hollister-based ZeroAvia company, which is developing zero-emission powertrain and building the infrastructure and fuel for the green flight revolution ($140M funding, Series B). Next up are the electric bicycle company Rad Power Bikes ($329.3M funding, Series D), headquartered in Seattle, and the San Francisco company Pachama ($79,3M funding, Series B), which combines machine learning with satellite and aerial observations to measure the amount of carbon captured in forests. Also in central Northern California based the 4th ranked company, Volta Charging ($575,6M funding, Post-IPO Equity), which engaged in the installation of sponsored charging stations for electric vehicles. Rounding out the top 5 is a Louisville company AMP Robotics ($76.1M funding, Series B). It applies AI-powered automation to recycling. Interestingly, these search leaders confirm the previously mentioned areas of clean technologies aimed at reducing CO2 emissions, but the variability of projects does not stop there.

Another area that is helping to solve climate problems is agriculture. As a result of its transformation, today's farms are reaping significant benefits from digital technology: lower consumption of water, reduced environmental impact and chemical runoff into local groundwater and rivers. Noteworthy are industry efforts related to carbon sequestration, which involves fixing atmospheric carbon dioxide in the form of soil organic carbon (SOC) as an effective way of reducing greenhouse gas concentrations. In 2021, the US Department of Agriculture has awarded $15 million to conservation partners across the country for 19 projects aimed at helping agricultural producers. One of them was the Hemp4Soil program, which has the goal of implementing hemp as a cover crop in nine states. As part of writing this article, I was able to interview a representative of the initiative, the founder of Heartland Industries. "We use the cross-correlation method of datasets to obtain data on soil carbon,” says Jesse Henry. “With the Haney test, we can determine where soil health is best and where it needs help. Multispectral cameras from cloud agronomy will create a set of carbon data and explore the value of returning to regenerative agriculture, which can reduce production costs and save time and energy". Such startup is an example of a fledgling company with the potential to make a positive impact on climate stabilization via increasing the amount of carbon sequestered in the soil and moving from green energy to green materials [10]. The company anticipates that the research results will be the most sophisticated accumulation of carbon data associated with regenerative farming practices [11].

Shifting from theory to product.

Climate crisis is a topic that has as many falsehoods and conspiracy theories surrounding it as the coronavirus. Some do not believe in climate change, others in human involvement. Meanwhile, environmental problems are already visible, and are likely to become even more serious in the future. Ensuring technological progress to maintain a favorable natural environment and economic growth in the face of climate change is fundamental to sustainable development. Climate tech start-ups deserve attention as one source of innovations needed to use natural resources efficiently, improve services and prevent the loss of biodiversity. They restore damaged ecosystems, increase the resilience of crops to harsh weather conditions and predict extreme weather events. The key challenge for start-ups remains scaling the business. However, compared to Cleantech 1.0, we are seeing far more successes than Tesla did in its time.

Indeed, cheaper renewable energy, advanced technologies, global agreements, and green finance are allowing more young companies stay afloat. Still, is this enough to move toward real solutions to climate issue? To what extent does business culture contribute? Perhaps the missions of traditional tech companies are becoming less encouraging to people? "We don’t need another photo-sharing app or another blockchain start-up. We need to solve the carbon crisis. But a lot of folks are chasing the easy money rather than taking responsibility for what needs to be done," notes investor Matt Rogers [12]. From these words, one conclusion is certain: funding is the foundation on which any startup thrives. By creating products that can both solve human problems and generate profits, we are moving toward Industry 5.0 and providing access to the tools for possible solutions to the much debated global warming.